State of the Writing 13th-19th January 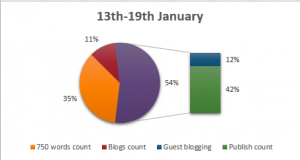 I am already over a 20th to my goal of 100,000 words, as I mentioned in my last post, so I gave myself a bit of a kick up the backside.  If my writing is going to be effective, it has to be stuff I want to write, not just going through the motions (though, going through the motions is good to make sure it beds in as a habit).  Something I’m noticing is I write CONSTANTLY.  Emails, content, client documentation, but I don’t count it towards my goals.  I’ve been coding a lot lately too, trying to get a couple of things sorted out for other people, so it’s been quite difficult here lately, as I feel like I’m not accomplishing anything, when actually, I’ve just not been writing fiction.  I fell in work late last year and just haven’t had the heart for it.  Aside from a killer headache for most of the last two months (varying degrees of painful, always worse on the laptop),  I’ve just felt…different.  I recognise this feeling as like the one I had after my last serious fall (about seven years ago), but because I recognise it, I kinda feel more equipped to deal with it.

So, I went old school the other day, grabbed my Livescribe and wrote till my hand felt like it was going to fall off.  What resulted was a credible outline for a new sci-fi universe and the closure to an old one.  It felt really good.

I get to talk about that later, when I unveil the first cover.  We’ve got plans for the others already.

All in all, I’d say a really good week.