State of the Writing, January 2014

So….there’s a special system set up to track my month – it’s quite long and involved, but you can find it here.

First up, the most important thing I’m doing is writing.  I’m looking for a job out of the house, but wile doing that, I’m trying to write and publish too.  It’s so difficult to balance right now, but I have hopes that I’ll manage it 🙂 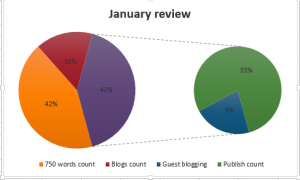 As shared in ‘State of the Writing’ over the month, I’ve completed 54,492 words.  Of that, my writing was really in fits and starts, and I’m still editing two books to release.  My 750words has been mostly all therapy, with some few bright spots of post apocalyptic story planning.  I think it’s fairly telling though that my 750words was as much as my guest blogging and my writing, and my blogging for my own blogs wasn’t exactly huge.

Not much to say here really other than week 2 for me was a mostly pillow-fort week.  I’ve had a lot of rough health things to deal with, and it was a bit of a blow to find out that my latest book isn’t edited right.  It’s something most indies face at some point, but Glass Block is now with a final proofreader (I hope).

January summary is the points, linked above: 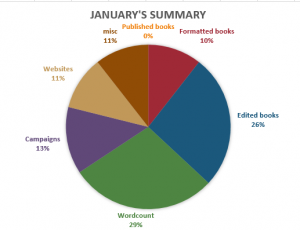 Goals for next month