U for unbelievably close #AtoZchallenge

I get to share some *really big news* tomorrow.  I mean, groundbreaking.  Well, for me at least.
Until then, I thought that I’d share a couple of other bits of housekeeping news…

I’m going to be announcing my revised publishing schedule for all of my short stories that have appeared during the short story challenge, seeking beta readers for Memento Mori, and doing some fun stuff around social media in the next few weeks – I’m really excited to share what I can with you because I really feel like I’ve been treading water for so long now, that I’ve been stagnant and a bit dull for a while.  I’m also currently taking a leaf out of my own book and redoing my plans instead of remaining with the ones I designed this time last year because things have finally shifted social media wise that it makes sense to replan.  But as I’m also doing it for clients, it’s actually quite easy.

I announce it first on my mailing list, so if you’d like to Beta, I’d love it if you head over there.  We’re also talking about building a small, exclusive street team. If you’d like in on it, please join up, comment or generally make some noise 🙂

Until then though – here’s the screenshot of the lineup for the book 🙂  The little snippet, Underground and above, has spelling errors, and I need to apologise for my handwriting. 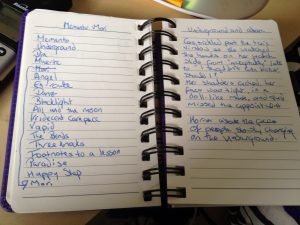