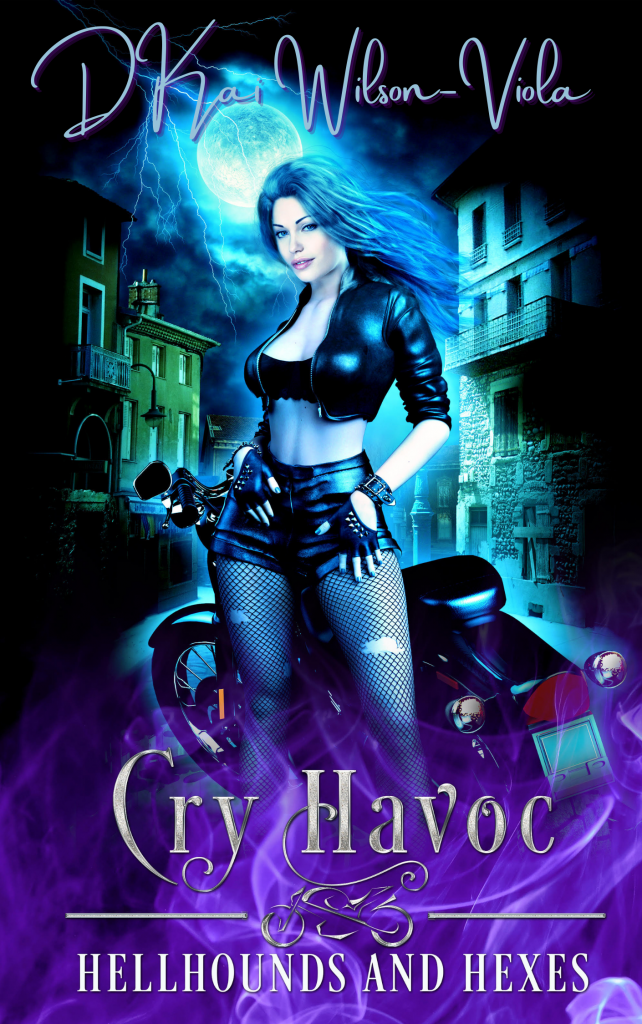 books2read.
Part of the Chancey and Finery series:
Part of the Hellhounds and Hexes series:

It's a little known rule in Hell, that you don't need to be "bad" to get ahead. In fact, chaos and distrust are often the best tools. All out evil? It's all so easy and predictable to stop. Mid-tier demon Alexi and his Hellhounds, Havoc and Hooligan, know this all too well, but he's bored. The humans are destroying themselves...

So when Chancey, a wizard of Renown, tries to summon her demon friend of old, Alexi to see if he knows who is tipping the scales, and instead transforms his favorite Hellhound to a human, it's pretty even odds that Havoc will live up to her name. All she has to do is find her place in the world, earn her way back to her Master *and* survive as a human.

Chancey though ... sees an opportunity to gain a unique familiar.
And Havoc? She'll tell you herself ...

Published: December 24, 2022
Cover Artists:
Harvest Moon Designs
Genres:
horror, paranormal, urban fantasy
Tags:
Preorders
Excerpt:
She moved out into the streets, thinking about who she'd find him with. If he wasn't at Jonathan's, that meant he wasn't conducting any of his normal deals, as most people went there to find him. If he wasn't *there*, she wasn't sure whether to head for his place, on the outskirts of Edinburgh, or if she should go deal with another avenue of investigation.
Two days ago, she'd been nominated as a 'Finder'. The first of her rank, and making her one of the Renown -the assembly of Mages - which also added her to the Council of Supernatural as an official envoy. She'd gone from being a no-name, no place Mage to one of the highest ranked people on the council, and beyond as it currently stood. It was so new that everyone was still calling it 'the council' with no idea what it was actually to become, and, as Jonathan hinted, it wasn't looking exactly...smooth sailing. In truth though, it was more like a court.
READ MORE

>Who would eventually come out as King or Queen, or royal head, and claim the figurehead remained to be seen. The politicking, she thought to herself, it's going to be...interesting. The vamps alone...then the packs...oh god, I don't want to be involved in any of it, she thought. But, here she was.

Her first 'job' as finder was to track down a demon accused of stealing from humans. Mundane theft, but there had to be some reason for it, or else, why would there be a demon committing it. If it turns out he's a bored klepto, I think the council will be pissed, she thought to herself, pulling her collar up and walking up the Grassmarket a little bit.
Edinburgh was a town that was 'uphill both ways', and in the valley of the Grassmarket, that felt especially true. It had been her home most of her life, but, sometimes, she wondered if she hadn't spent some of her time here just not paying attention. Or, more accurately, until the Incident, she'd had no reason to think about the world underneath the one she lived in.
Now though... She'd been hearing whisperings that there was a serial killer with supernatural links on the loose somewhere in the South West of England, and a cult collecting homeless in Cardiff. London was a ball of conflicting, differing, frankly confusing reports. And a lot of things needing cleaned up. Here though, was a demon. Stealing stuff.
But the Council, capital C, were hoping that if the pilot in Edinburgh went well, that it would be easier for others to adopt and adapt to what they needed in the coming weeks, months, years. The supernatural community was very, very niche, but not so niche that no one could be found. Not so niche that they couldn't deal with everything that was thrown at them. Dealing with it, while it overlapped with the world that didn't know about them...that was the problem. Serial killers with magic, in a normal jail. That won't fly. She shuddered as a cold arrow of wind touched the nape of her neck, and she huddled up as much as she could. The hill up to the registry office and libraries was beautiful, colourful and full of boutique shops, but mid-afternoon, it wasn't as busy as she expected. Even the weather usually didn't make it this quiet. She paused, looking around, and behind her, before spotting a hooded figure ducking behind the edge of a small monument at the bottom of the hill. She could never remember whether it was for water, or was an actual monument, but there was definitely a flicker of movement there, that hadn't continued on to the pass by on the other side. Frowning, she turned back again, and moved to the top of the road. As if crossing a boundary, the bubble of silence that had imposed itself on her, burst, and she could hear the traffic. It was almost as if someone had isolated her, briefly. Nothing had impinged on her personal shield though, so whatever it was...
She shook it off.
COLLAPSE
books2read.